Ladies and gentlemen. Cease your goings-about for a moment and assess your situation. Specifically, I ask you to ask yourself a question both blunt and incisive: “Am I lonely?”

Please, really, take a moment and search your heart. You might surprise yourself with your own answer.


“You have made us for Yourself, O Lord, and our heart is restless until it finds its rest in You.” (St. Augustine, Confessions, Bk. I, 1) 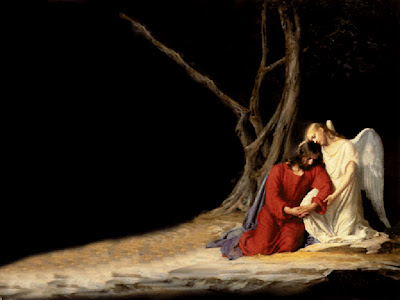 But do we see loneliness in Christ’s example? Not in the least. Instead, we see the beautiful inverse of loneliness: solitude. In loneliness, a man allows himself to be cut off from God, and therefore is one in his alone-ness. But in solitude, a man spends time devoted solely to His Creator, uniting his heart to that Most Sacred Heart in that mystical union that transcends even the unity of marriage, and he is one not in alone-ness, but rather one with God. Either way, in the end there is only one; but in loneliness, that one is broken, whereas in solitude, that one is whole. Christ knew even during His scourging and crucifixion that God was with Him, that God was in Him, that God was Him, and in crying, “Why have You abandoned Me?”, He calls us back to Psalm 22 – a cry of victory in the closeness, the nearness, the oneness with God the Father Whom He knew so well.
“I was looking for You outside myself and I did not find the God of my own heart.” (Bk. VI, 1)
We struggle with loneliness under countless circumstances, but perhaps no circumstance sears our flesh so strongly as that ache for communion we feel when we have no other to whom we may give our burning love in affection, in matrimony, in pure eros in its greatest and most redeemed sense. Whether we are vocationally called to married life, to consecrated religious life, or to the single life, we all experience this longing, this desire, and we must recognize it for what it is. It is our hearts yearning for communion with God, and our fallen minds telling us that the goal is the creation rather than the Creator. We will never be satisfied in attempting to fill that hole with a human being, no matter how much we might love them or how much they might love us in return. But we can be satisfied if we devote ourselves to prayer first and foremost, above all, and what’s more, we become able to love others in a proper, balanced, healthy way. In prayer, we do not fill the hole with solid material, for God is not a wall or a stone but a River, and so the River gushing out through the hole in our hearts floods everything and everyone around us with the very presence of the Living Water. And it is this state of being in which we are truly rightly ordered to love a person of the finite persuasion. “It is not good that man should be alone,” God said (Genesis 2:18), but we must put ourselves in good order before we can love another without actually being a danger to them.
The short of it is that we must put God first, but “putting God first” is a trite expression that doesn’t quite capture the earth-shattering, world-exploding beauty of our calling to LOVE GOD. The only way it has ever been said with even the remotest degree of adequacy is that “you must love the Lord your God with all your heart and with all your soul and with all your strength and with all your mind” (Luke 10:27). Loving your neighbor, be they friend or spouse, simply follows suit, and if they are a truly Godly individual themselves, they will not be offended in the least that you should prioritize the Lord over them.
I leave you with one last quote from Augustine’s Confessions upon which you may meditate, and a wonderful video from Jackie Francois (whose website can be found here). Stay classy, my friends.
“Who will grant me to find peace in You? Who will grant me this grace, that You would come into my heart and inebriate it, enabling me to forget the evils that beset me and embrace You, my only Good? What are You to me? Have mercy on me, so that I may tell. […] Through Your own merciful dealings with me, O Lord my God, tell me what You are to me. Say to my soul, ‘I am your salvation.’ Say it so that I can hear it. My heart is listening, Lord, open the ears of my heart and say to my soul, ‘I am your salvation.’ Let me run toward this voice and seize hold of You. Do not hide Your face from me; let me die so that I may see it, for not to see it would be death to me indeed.” (Bk. I, 5)